Field reports show that as many as 30% of sucker rod string failures are a result of improperly made up rod string connections (not achieving circumferential displacement). API Recommended Practice 11BR for care and Handling of Sucker Rods states:

“as a result, applied torque has not proven to be the most accurate, nor the most practical means of measuring the preload stress level in a sucker rod joint”

What the industry has realized is that current technologies to connect oil well sucker rods using commercially available rods tongs do not achieve a reliable and consistent connection between rods and couplings that are published by sucker rod manufacturers without repetitive human verification and measuring or complex computer verification software and instrumentation. Development work to realize technology to achieve a consistently accurate circumferential displacement between the connections on every connection without the requirement for human verification or the use of a complex computer system was the goal of the Circumferential Displacement Sucker Rod Tong project.

Repetitive physical testing was performed using conventional rod wrenches and calibrated torque wrenches to identify the real-world torque that is applied by hand to sucker rod connections to achieve shoulder. Results of that testing on 5/8” to 1-1/8” sucker rods revealed a consistent average result of between 80 ft. lb. and 105 ft. lb. relative to sucker rod size. Engineering analysis of existing commercial rod tongs was completed to identify how those tong systems delivered torque and speed to the connections and why within their design consistently accurate circumferential displacement was not being achieved. Engineering review revealed that commercially available tongs were not designed to recognize the shoulder of the sucker rod connection or to move a specific distance past shoulder to an identifiable position. Existing market commercial tongs were designed to deliver torque and speed. Industry practice assumed that a fixed circumferential displacement was to be achieved based on the application of torque. Inertial rotating forces applied by the large displacement hydraulic motor governing the final output torque achieved within the connection between the sucker rod joint and the rod coupling were calculated. The effects of rotating mass and speed and the dynamic response of the hydraulic relief valve controlling the maximum function pressure setting and therefore the final torque value was calculated.

These engineering calculations confirmed that to stop the freely rotating mass in existing commercial tongs an excessive of 300 ft. lb. of torque would have to be
applied. Commercially available tongs could not stop at the shoulder. Further, tests indicated that variations in rotating speeds, hydraulic circuitry, pressure relief valve settings, and dynamic response and hydraulic temperature would cause final torque values and therefore final circumferential displacement to be significantly inconsistent and unpredictable. Confirming API’s recommendation, an applied force using commercially available tongs was not predictable or dependable in achieving circumferential displacement. Engineering was continued to apply low moment of inertia, full-strength spinning gear sets that could stop abruptly with a braking force that was lower than hand-applied shouldering forces. Calculations revealed that braking forces of less than 25 ft. lb. of torque could be realized to stop the rotating gears within the distance of the first line on a circumferential displacement rod card. Design analysis continued through the selection of a variety of low-speed high torque hydraulic motors sizes with maximum capacity under full load to deliver from 10 to 80 ft. lb. of torque.

Repetitive physical shoulder testing was conducted with a prototype gearset and hydraulic motor drive to confirm that variations in rotating speeds, hydraulic circuitry, pressure relief valve setting, and dynamic response and hydraulic oil temperature would not affect the ability of the motor and driving gear set to accurately and repeatedly achieve shoulder while never exceeding shoulder. Tests revealed accurate and repeatable achievement of the shoulder could be realized. Engineered prototype models were developed to mechanically and hydraulically spin sucker rod connections to shoulder without exceeding that shoulder and then to proceed to a physical-mechanical stop set at a circumferential displacement from that shoulder point for a specific sucker rod size and grade. Critical to the simplicity of the conceptual prototype design was that spinning a sucker rod connection and gear drive from 60 to 80 rpm to shoulder could be reproduced reliably without ever exceeding the shoulder position of the connection. To achieve final circumferential displacement from shoulder, a hydraulic cylinder driven linear rack gear engaged with a pinion gear moving to a settable mechanical stop was applied to the design. Mechanical design criteria for the operation required that the rack gear remains in continuous contact with the pinion gear however the rack could not move during the shoulder spinning phase of the operation. A custom clutch was designed and configured to fit the application.

Development and testing were conducted to achieve gripping and holding standard and hardened couplings without marking the couplings and without moving the bottom connection when breaking out the top connection. A gripper jaw assembly was designed to be installed in the tong between the upper Tong jaws and the lower convention back up. Functionally the user interfaces with hydraulic valve levers for spinning the tong to shoulder and actuating the hydraulic cylinder were separated for ease of operation. The engagement of the clutch was automatic whenever the motor is stopped.

Instrumenting of the CD Tong functions to prove shoulder, circumferential displacement, torques and counting of turns valuable as part of the testing processes through prototyping is being applied to the tong for the option of data logging, analytics and to provide a data bank of information to predict optimal Circumferential Displacement for critical wells. Instrumentation also offered the option of providing the operator a red/green light clearance that each connection during operation within acceptable Circumferential Displacement tolerances. The instrumentation includes hydraulic differential pressure transducers across the hydraulic motor and cylinder work ports providing accurate breakout torques and reference makeup torques with reference to CD, a rotary to measure the hydraulic motor and cylinder speed and position.

The CD Tong is Patented.

Multiple in shop connections made with the CD Rod Tong 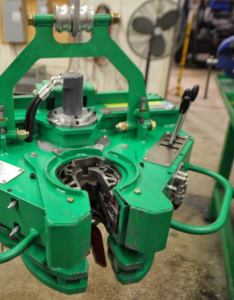